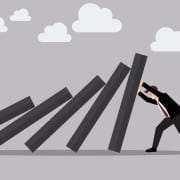 I recently ran across a post by Ruthie on Ruthie’s Law inquiring, “Are you tough enough?”  Ruthie suggests that:

Her post responds to this one by Dan Hull of What About Clients? that argues that lawyers naturally lack resilience but must acquire it to be effective in practice and in the business of practicing law.  Dan posits that

We lawyers are, in the main, natural-born weenies and squirrels. We are great people. But we sweat small stuff–part of our job, of course–and we over-react. We have amazingly poor defenses to each day’s hard knocks and battles.

However, without even doing an empirical study, it’s obvious to me that lawyer “over-sensitivity” is a huge problem in our lawyer worlds and workplaces. Our reactions to the sum of small bad stuff prevents us from doing the big stuff or from doing it well. This hurts us as people. But way more importantly, it hurts your client: the main event.

And, for the sake of completeness, Dan’s post was prompted by Mark Bennett‘s post on Resiliency, in which he responds to a post by Ed Poll arguing that lawyers “can’t sell” because they lack resiliency.  Mark, who writes the blog Defending People: The Art and Science of Criminal Defense Trial Lawyering, convincingly excludes lack of resilience as an attribute of criminal defense lawyers.

I find this conversation fascinating and worth some exploration.  My first question is, as usual, is it true that lawyers (as a group) lack resilience?  Whether it’s true as a generalization is much less important than whether it’s true for a particular lawyer, in my view.  And if it’s true for someone, the reason why it’s true is much less important than devising a method for that person to increase his or her capacity for resilience.

So, how can a lawyer choose resilience in the face of a challenge?  Rather than make this post one of mammoth proportions, I’ll provide some strategies on resilience on Friday… So check back!