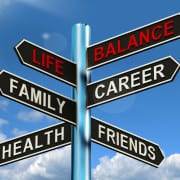 I recently posted about the negative view that some partners have of associates seeking work/life balance and suggested that perhaps transparency in employment is one answer to ensuring that those who want a “balanced” lifestyle (whatever that may mean) are able to find it in law firms composed of other lifestyle-focused lawyers.  I wondered whether that’s an overly rosy view.  Perhaps not.

An article from the Wall Street Journal (no longer available) discusses the perks and drains of working in a large law firm, stating that big-firm associate attrition is at record levels.  The story goes on to report a law student’s experience in interviewing with Cesar Alvarez, president of Greenberg Traurig:

Last fall, Cesar L. Alvarez, president of Greenberg Traurig, was interviewing a student at an Ivy League law school. The interview was just beginning when the student asked Mr. Alvarez to tell him what the “lifestyle would be like” at the firm.

The student didn’t get a “call-back” interview. “I told him that if he’s going to work at a large law firm, that mind-set isn’t going to get you very far,” recalls Mr. Alvarez, who is based in the firm’s Miami office. In his opinion, the question reflected the attitude of more and more young lawyers. “A generation ago, nobody would have asked that question, even if they’d thought of it. But there is a difference in people coming out of law school now.”

That’s transparency.  Granted, I would not have suggested the student ask that question early on (at the on-campus interview or when the interview was “just beginning”), nor would I have suggested that he ask it of the firm’s president.  But, assuming it was a conscious decision, the student evidently wanted to know about lifestyle as a litmus test on the firm; Mr. Alvarez’s response suggests that the question itself is a litmus test on the student.

The trick, of course, is whether transparency exists on the other end of the spectrum.  It’s far less risky to avoid focusing on lifestyle needs or desires during the interview, but the pain comes when the workload and hours required exceed what the associate expects.  (But do note that the article quotes Claude Millman, a Proskauer Rose partner, as being honest with lifestyle-conscious associates about the increasing client demands that comes with advancing seniority.)

And, as usual, the answer almost certainly lies in how the question is posed.  If work/life balance is billing 1300 hours annually, not many firms are going to be supportive.  If it’s billing 1800 or 2000 or 2100, that may be different.  The devil is in the details.

Why women are leaving law firms — and why they’re staying.